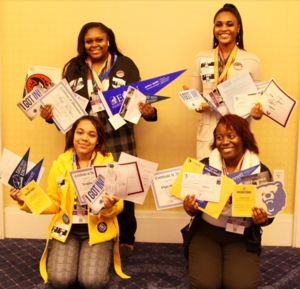 Rocky Mount Prep was among 10,000 attendees present at the 18th Annual HBCU College Festival sponsored by Alfred Street Baptist Church, one of the oldest and largest African American churches in Alexandria, Virginia.

Rocky Mount, N.C. – On Saturday, January 25, seven Rocky Mount Prep scholars, along with their families and school administrators departed from the school at 3:15 a.m. heading to the Gaylord National Resort and Convention Center. Rocky Mount Prep was among 10,000 attendees present at the 18th Annual HBCU College Festival sponsored by Alfred Street Baptist Church, one of the oldest and largest African American churches in Alexandria, Virginia.

The festival presented the opportunity for Rocky Mount Prep scholars and families to make connections with more than 70 Historically Black Colleges and Universities (HBCUs), many offering on site admissions, waiving application fees and conducting interviews. College representatives also provided information regarding admissions and financial aid and conducted parent seminars for families. A Rocky Mount Prep scholar in attendance felt that it was a great networking experience.

“It was a great way to network and in the end depending on what school I may attend I will more than likely see someone I have spoken to before from the festival and we can ultimately become friends or roommates,” scholar MyKiah Williams stated.

Scholars arrived with transcripts, scores and resumes. Four Rocky Mount Prep scholars left with a plethora of acceptances and scholarship funding. Scholars, De’Andra Bryant, Charron Lewis, MyKiah Williams and Y’Mani Wilson were among the recipients receiving offers during the festival.

While on site, the four young women received 31 college acceptances. In addition, they were awarded a combined total of $618,836 of scholarship money while in attendance of the festival.

“Our mission is to educate, equip, and empower each scholar to excel and our vision is for scholars to be prepared to embrace and engage future opportunities. For us, at Rocky Mount Prep, the HBCU Festival is where our mission meets our vision. We really push our scholars to perform well, we push our team to serve scholars well, so for them to have the opportunity to impress college and universities to invest in their future and come out with multiple offers and scholarship money is a true testament to what we believe and instill in them daily. When you work hard and prepare, opportunity is present and it is yours. Our scholars went after it! They knew they were worthy, they owned the moments, they embraced the discomfort and came out on top. I could not be more proud of our scholars and the team that has supported them over the years. This is just a small sampling of the brilliance within Rocky Mount Prep,” Rocky Mount Prep Head of School, Dr. Chaunte Garrett stated.

Rocky Mount Prep plans to continue this tradition next school year, hopeful that an even larger number of scholars will hop on the bus and take advantage of the opportunity.

“I look forward to even more scholars attending and getting admissions and awards next year,” Garrett added.

This year’s participants had nothing but favorable comments to say about the experience.

The Bryant’s attended for the second time this year. “Because of these experiences, my daughter and I were able to gain valuable information about the things she needed to continue to do in order to gain acceptances and scholarships. She applied the information given and walked away with a plethora of incredible opportunities! We are forever grateful! I encourage all of the parents and scholars to hop on board next season and take advantage of the exposures and opportunities! You will not be disappointed,” Rocky Mount Prep parent, Renea Bryant stated.