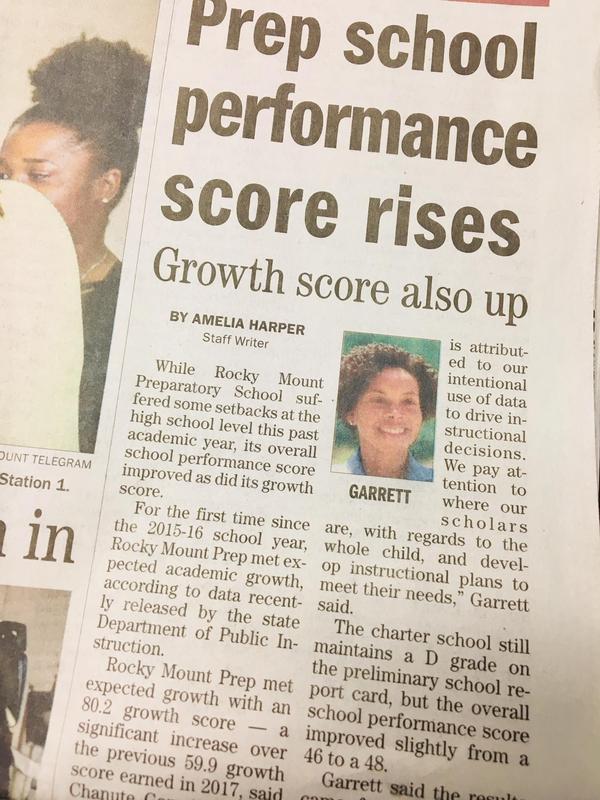 For the first time since the 2015-16 school year, Rocky Mount Prep met expected academic growth, according to data recently released by the state Department of Public Instruction.

While Rocky Mount Preparatory School suffered some setbacks at the high school level this past academic year, its overall school performance score improved as did its growth score.

For the first time since the 2015-16 school year, Rocky Mount Prep met expected academic growth, according to data recently released by the state Department of Public Instruction.

“We believe our growth is attributed to our intentional use of data to drive instructional decisions. We pay attention to where our scholars are, with regards to the whole child, and develop instructional plans to meet their needs,” Garrett said.

The charter school still maintains a D grade on the preliminary school report card, but the overall school performance score improved slightly from a 46 to a 48.

Garrett said the results came from concentrated efforts to improve and the significant increase in growth scores.

“When looking at our scholars’ progress last year, we recognized a lot of challenges in middle school math and English language arts. We equipped scholars with the resources needed to become strong readers and proficient in essential mathematics skills and concepts,” Garrett said.

While the school is celebrating improvement in the overall achievement of end-of-grade reading and math scores, Garrett said the data indicates a need for improvement in some areas. Because the elementary school saw a decline in mathematics, Rocky Mount Prep has implemented a concept-based curriculum and targeted mathematics support for the entire K-12 campus. In most grade levels, the school has reduced class sizes to enhance individualized learning, attention and building of relationships between scholars, staff members and families, according to a press release from the school.

The high school is a special area of concern, but Garrett said those concerns are being addressed. The high school struggled in all areas last school year, with the exception of increased performance in Math I, Garrett noted.

However, she also said the school is putting in place more support for high school students this year.

“We have added the support of a social services coordinator as a level of intervention to support scholars and help with securing appropriate documentation when scholars leave Rocky Mount Prep prior to graduation. Our graduation team utilizes their relationships with families and scholars to help us keep track of their progress. Also, we continue to provide wrap-around services to our scholars throughout their high school experience,” Garrett said.

Garrett also said the school has heightened its focus on college preparation while also increasing career readiness experiences prior to graduation.

“One of the most significant changes is adding an additional guidance counselor to our secondary guidance team. This change enables us to provide more individualized and personal services in preparation for graduation to scholars in grades 11 and 12,” Garrett said.

The improvement in school performance and growth scores is critical this year as the charter school faces the renewal process during which the state determines whether its charter will remain in effect.

This school year has already gotten off to a strong start and interest in the charter school continues to grow. The school started the academic year fully staffed in the elementary school and in all core content areas in high school, Garrett said.

“We have a team that is dedicated to making sure our families are involved, in the know and active partners in their scholars’ education,” she said. “I’m excited for the scholars and grateful for the team that does the work in supporting them.”