Classes begin at some area schools 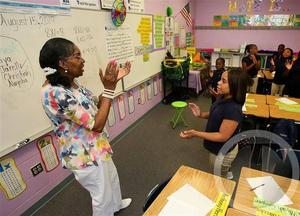 Rocky Mount Preparatory School, one of the state’s oldest and largest public charter schools, began its 22nd year of instruction Monday with new leadership, smaller class sizes and many other changes in place.

While most traditional public school students in the Twin Counties will be starting school in a little over a week, many schools in the area already have started classes.

School starts on Aug. 26 for traditional public school students because that is the earliest date the N.C. General Assembly will allow classes to begin. However, private schools are not bound by these regulations and the state grants greater calendar flexibility to charter schools and other specialized public schools, such as Cooperative Innovative High Schools and those under certain Restart models.

Rocky Mount Preparatory School, one of the state’s oldest and largest public charter schools, began its 22nd year of instruction Monday with new leadership, smaller class sizes and many other changes in place.

Dr. Chaunte Garrett, the former chief academic officer of the school, replaced former head of school Todd Pipkin, who resigned in June. She said that the school year already has gotten off to a good start.

“Our scholars came in with smiles and were greeted with excitement,” Garrett said. “We are on a mission to educate, equip and empower our scholars to excel, and our school community is definitely enjoying it.”

The school traditionally enrolls more than 1,100 students each year. Figures for this year’s enrollment are not yet available as that figure is not calculated until the 20th day of school, said Haley Ward, director of communications and recruiting for Rocky Mount Prep.

North East Carolina Preparatory, Edgecombe County’s only charter school, has been in session since Aug. 6 and was one of the first schools in the Twin Counties to start classes.

The Edgecombe County Early College High School, which is located on the Tarboro campus of Edgecombe Community College, also began on Aug. 6 to allow students time to prepare before the start of fall classes Thursday at ECC.

Students at Rocky Mount Academy, the area’s largest private school, will begin classes on Monday. Our Lady of Perpetual Help, the only Catholic school in the Twin Counties, also will open for students on Monday. The school offers classes for students in grades pre-K to eighth grade.

Edgecombe County Public Schools will hold an open house event for all traditional schools in the district from 2-7 p.m. on Thursday.