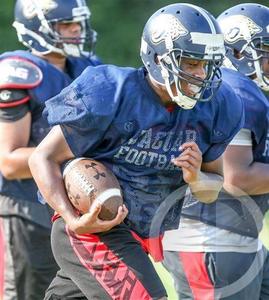 Rocky Mount Prep and first-year coach Al Williams look to break that trend, and will have to do so largely on the road. The team has seven road games and four home contests.

When Kyon Bryant introduced himself this week during a Rocky Mount Prep football practice, the senior said his position was “athlete.”

Each year, when football practices and organized team workouts begin, Bryant is poised to make that statement true. The 6-foot-2, 230-pound senior has begun the past three seasons working out with the wide receivers.

Bryant, who also plays linebacker, could also be found in the defensive secondary with the defensive backs, as well as in the backfield taking snaps as a running back. He never lasted long at these positions, however, as he was summoned to play quarterback for the Jaguars when injuries wiped out their starting QB plans.

“I was really a wide receiver every year, but each time an injury would happen and the team looked for someone to take over,” said Bryant, who was originally set to play tight end this season. “So I had to step up and be the quarterback. But I’ll still get a chance to do things in the backfield. Coach, he trusts me to run the ball, too, so we’ll get some plays where I just do that.”

Bryant is gearing up for yet another season as the RMP quarterback, and first-year coach Al Williams expects that “athlete” tag to live up to its meaning this fall. Williams was the team’s defensive coordinator the past two seasons, and when 2018 coach Omar Jackson stepped down, Williams stepped up.

Williams has long appreciated Bryant’s athletic ability when working as an assistant, and when the coach took over the program he made sure that Bryant would be able to affect the game as much as possible.

And playing quarterback ensures Bryant will get to touch the ball on every snap.

“I tried to move him this year. I wanted him to play tight end because he can control the middle of the field in the passing game and he’s smart and strong enough to be a very good blocker,” Williams said. “He would be an unstoppable piece, but he has to play quarterback now. It’s important to have a QB on the field that the players trust. It’s huge. And the guys trust him.”

The Jaguars are coming off a 2-9 season which started off strong. The Jaguars won their first two games out of the gate, including a Week 2 win over a Bear Grass Charter team that made the 1-A playoffs.

RMP scored a total of 58 points during those wins, but couldn’t keep up the pace as the losses began to pile. The Jaguars went on to lose the next nine games, a stretch that produced 74 points. The team was in position to win at least two of those remaining nine games, but lost by four points each time.

Williams said that his team is working hard to change the narrative that has surrounded this team for years.

“Our goal is to bring discipline and dedication to this program where we can start a trend where the younger guys see the older guys being dedicated and playing together,” Williams said. “That way we can grow this program to the point where we can correct some of the historical problems we’ve had here at Rocky Mount Prep. We want to put ourselves in position to be spoken about in a positive light by the time we get to our conference schedule.”

The coach said that social media platforms have been toxic as opponents and others in the area have brought up Jaguars’ recent performances across previous seasons. RMP has 12 wins over the past seven seasons — a 12-65 record — and the team is on its fifth head coach since 2013.

The most successful season was a 3-9 mark in 2016, the final campaign under three-year coach Danny Ward.

But the Jaguars have an opportunity to make progress. They lost six starters from last year’s team, and with 11 seniors on the roster this year they expect this will be the season that could change the trajectory of the program. A mix of established and experienced players will help bring along the younger players starting for the first time.

One of those building blocks is senior Darius Blythe, an offensive guard and defensive tackle. Blythe, a 6-2, 225-pound two-way player, attended a couple football camps this summer and picked up some drills from the college coaches in attendance. There, Blythe worked on different techniques like footwork, getting off the ball quicker and how to better use his hands.

“I was mostly working on my hand techniques at the camps,” Blythe said. “I was just trying to get better at different things. A big one was getting off the ball faster. I’ve been working on my hips, too.”

When the Jaguars began training camp this summer, Blythe brought that instruction to his teammates. The linemen have implemented hip mobility drills, and Williams has already seen improvements in that group.

“When he came back to us he was talking about a technique he worked on called hip flipping,” Williams said. “The goal is to flip your hips to the side to get space, and when he came back over the summer that was one of the things I saw him working on.

“So when we got to our individual stations, I made sure to make that a part of our practice schedule. I can now put him in one of those stations and he can show his teammates what he’s learned and it brings that nuance to our team. It’s great to see because he’s an individual who wants to be a leader, he is growing and bringing his teammates along.”

The Jaguars will get their first chance to point the program in the right direction on Aug. 23 when they travel to Kinston to play Arendell Parrott Academy, and 8-man team that is trying to make the jump to 11-man status.

Fast fact: The Jaguars have gone 12-65 over the past seven seasons, with three wins in 2016 being the high-water mark. Rocky Mount Prep and first-year coach Al Williams look to break that trend, and will have to do so largely on the road. The team has seven road games and four home contests.